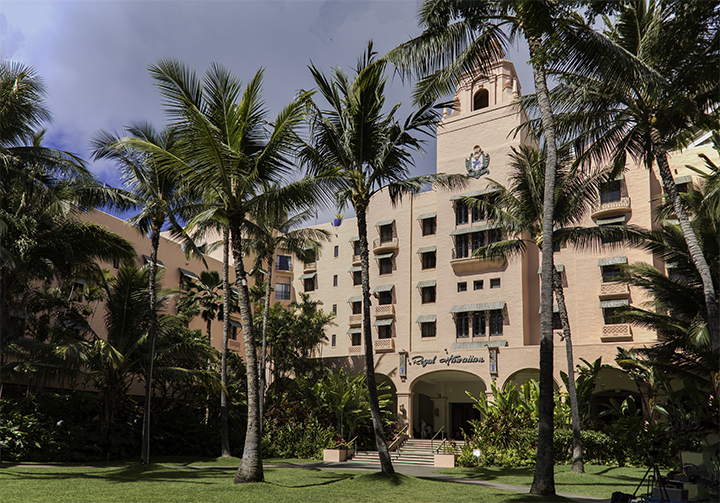 The Royal Hawaiian Hotel, one of the most historic Hawaii hotels.

In almost every town you visit in America you are bound to find a number of famous historic hotels. This is also true virtually anywhere else in the world. Many are historic for a number of reasons. They might have been a pioneer in a number of areas. They showcase a timeless grand architectural designs that still remain stylish today. Or they have fascinating stories behind them. Here are the stories of some of our most historic Hawaii hotels.

The Most Historic Hawaii Hotels 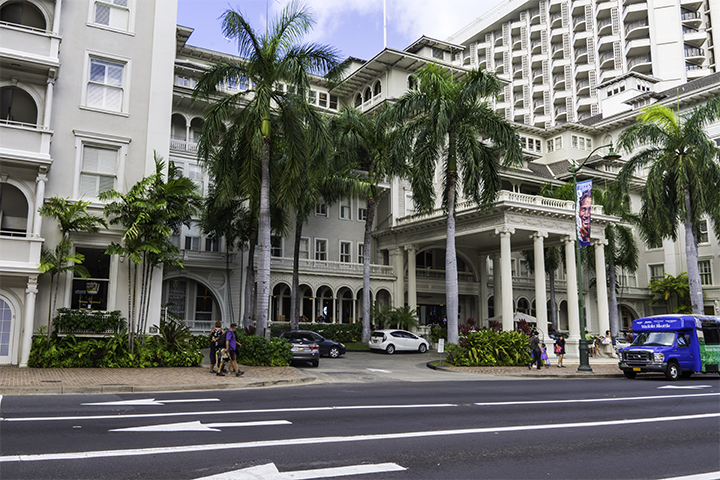 The Moana Surfrider Hotel, another one of the most historic Hawaii hotels.

This classic beachfront property was the first hotel opened in Waikiki in March 1901. It has gracefully withstood the test of time. It has gone through a number of expansions, renovations and restorations. The last of which occurred in 1989. The hotel was the brainchild of a local wealthy landowner, W. C. Peacock, who also had a home in Waikiki.

At the time, Waikiki was a secluded beach area. Taro patches, wetland marshes and duck ponds surrounded it. Visitors to Waikiki would often remark of the need to have a place where they could stay within the area. Peacock responded to this opportunity by constructing a classically designed hotel. It featured Ionic columns and a porte cochere on the street side with wide lanais on the ocean side. This design inspired the hotel’s nickname, “The First Lady of Waikiki.”

The hotel exchanged hands several times after its construction in 1901. Among its many owners was Matson Navigation Company. The company acquired the property in 1932 as a complementary business to its Hawaii to mainland steamship services. The hotel grew as tourism to Hawaii began to flourish.

Expansion and Growth of the Moana Surfrider Hotel

The hotel hosted the popular live nationally syndicated radio show, Hawaii Calls. The radio show featured inviting sounds of waves crashing on Waikiki beach. In turn, this lured more tourists to the islands. Matson later built a property adjacent to the Moana. The company called it the SurfRider Hotel. Many say it was one of the most historic Hawaii hotels.

Matson sold their hotel interests to the Sheraton Company in 1959. Sheraton then sold the Moana and the SurfRider in 1963 to Kyo-ya Corporation. But Sheraton continued to manage the properties. Kyo-ya added a new adjacent hotel calling it the Surfrider Hotel. And the company merged the older SurfRider property into the Moana Hotel.

In 1989, Kyo-ya made a substantial investment in restoring the Moana. The idea was to restore it to how it would have appeared when it first opened in 1901. It also consolidated the adjoining hotel properties and renamed it the Moana Surfrider Hotel. It has since been rebranded under the Starwood Brand, Westin, which includes Sheraton branded properties.

The hotel is also famous for a number of other reasons. It’s listed on the National Registry of Historic Places. It was a recipient of the President’s Historic Preservation Award and the National Preservation Honor Award. Other awards included: the Hawaii Renaissance Award and the Hotel Sales and Marketing Association International Golden Bell Award. Rich and famous people have routinely stayed at the hotel. The Prince of Wales, who would later become King Edward VIII, vacationed here. Author Agatha Christie and Hawaii’s own legendary waterman and Olympic champion, Duke Kahanamoku also frequented the property.

Matson Navigation Company and its steamship operations between Hawaii and the US mainland bought in increasing numbers of tourists. As a result, the Territorial Hotel Company demolished an existing hotel and replaced it with a larger one in 1927. They called it called the Royal Hawaiian Hotel. This hotel fronting Waikiki Beach featured a Spanish/Moorish architectural design and a prominent pink colored concrete stucco facade. This design gave the property its nickname, The Pink Palace of the Pacific. The upscale hotel had deluxe 400 rooms, each of which had its own balcony. However during the depression, the Territorial Hotel Company became bankrupt. As a result, Matson Navigation Company acquired this hotel and others owned by this company.

The company closed the hotel during World War II. It then became a rest and recuperation facility for the military serving in the Pacific Basin theater. Many veterans would fondly recall their stays in the Pink Palace during World War II. Famous guests of the hotel included President Franklin Roosevelt and General of the Army Douglas MacArthur.

During the 1960s, the hotel was the home of the Concert by the Sea radio show. The US Armed Forces Radio Network produced and staged the show on the hotel property. And as a result, it became a place to visit for servicemen on leave from their tours in Vietnam.

After the war, the hotel prospered as did most of Hawaii’s hotels in Waikiki. Like the Moana hotel, the Sheraton Corporation and then the Kyo-ya Corporation purchased it. But Sheraton still managed the property. The Moana and the Royal Hawaiian hotels continue to be the flagship properties of the Starwood chain in Hawaii. This consists of brands such as Sheraton and Westin. The hotel, which is a member of the Historic Hotels of America, was completely renovated in 2008.