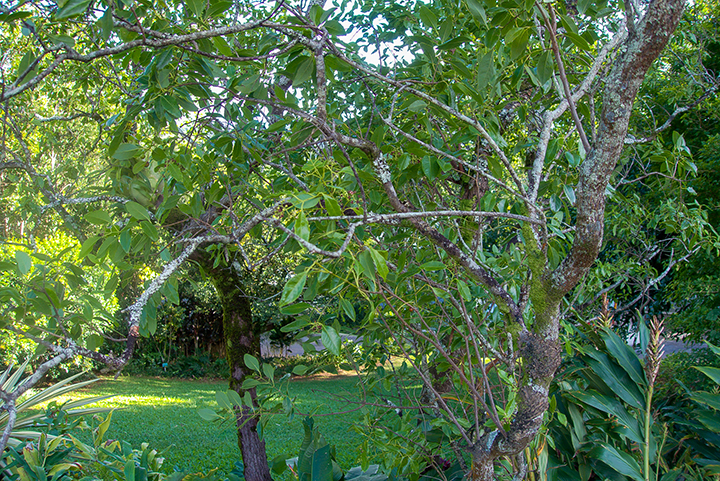 Photo of Hawaii’s rare sandalwood trees taken at and with permission of the Lyon Aboretum in Honolulu, Hawaii.

Hawaii has six unique sandalwood species that exist nowhere else in the world. The prized and fragrant sandalwood tree once grew in abundance in Hawaii. So much so, the Chinese knew the islands as Tahn Heung Sahn or the Sandalwood Mountains. But Hawaii’s sandalwood were tied to China in more ways than just what the Chinese called Hawaii. The sandalwood trade between China and Hawaii had a profound impact on Hawaii’s history. It heavily influenced the way the Hawaiian kingdom became integrated into worldwide affairs. This is the story of Hawaii’s rare sandalwood trees.

The Market for Sandalwood Trees

The world first became aware of Hawaii’s sandalwood forests in the late 1700’s. This was when Captain Kendrick sailed from Boston to Hawaii in the late 1700s. While there, he smelled a familiar and fragrant odor coming from someone burning a sandalwood tree.  Hawaiians called this tree ‘iliahi. As a world traveler, he knew of the high demand for sandalwood, especially in China. The Chinese traditionally used the wood in making incense, medicines, carvings and ornamental pieces.

At the time, the Hawaiians could not fathom how other parts of the world valued this tree. Because of this, sandalwood became Hawaii’s first export product. But it came with a heavy price to both the Hawaiian people and the islands’ environment.

The then king of Hawaii, Kamehameha I, capitalized on the demand for sandalwood in China. But Kamehameha made sure to tightly control its supply and sale. The king placed a kapu (a restriction) on harvesting young trees. Also, he never did transactions on credit. Among other things, the king used sandalwood to trade with merchants for weapons and other military supplies. This ultimately helped him to gain control of all the Hawaiian Islands. In turn, the merchants would make a profit selling the precious sandalwood to eager buyers in China.

King Kamehameha even purchased a sailing ship to directly transport and sell sandalwood in China. However, Kamehameha, who personally made the trip, was unable to make a profit in China. This was because the Chinese assessed brokerage and port fees on his cargo of sandalwood. Undaunted, Kamehameha then used this experience to impose port fees on sailing ships entering Hawaii’s harbors.

Exploitation of the Sandalwood Forests and Impact on Hawaii


Kamehameha’s son, Liholiho, succeeded him after his death. Unfortunately, Liholiho loosened controls over the sale of sandalwood. His personal debts and inability to control his chiefs pressured him to do this. As a result, the rampant over-harvesting of the sandalwood created widespread calamity across the kingdom. Lacking Kamehameha’s strong leadership, the king and his chiefs and ran up excessive amounts of debt. They went on a spree buying items on credit to satisfy their newly acquired appetites for western goods. Because of this, they had to impose a sandalwood tax upon their subjects. This was done to help pay down the debts owed to foreign merchants.

Commoners in Hawaii had to pay this new tax in one of two ways. They ether pay in cash or by gathering half a picul (slightly less than 67 pounds) of sandalwood each year. The penalties for not paying the sandalwood tax were severe. Many lost personal property and possessions. Some were so exhausted and overworked harvesting and hauling sandalwood they became ill or died. The sandalwood tax and the unchecked harvesting of sandalwood led to two famines. This was because common people had no time to spend on farming and food gathering. As a result, most of sandalwood forests in Hawaii were decimated by the 1830s.

Despite the extensive ecological damage that occurred, there are still pockets of Hawaiian sandalwoods today. There are even a number of people interested in restoring them. This offers hope for the future of Hawaii’s sandalwood forests.

One can find Hawaii’s largest grove of sandalwoods on the slopes of Mauna Loa on the Big Island. Here, you can view Santalum paniculatum, the green-flowered species endemic to this island. It sits on property of the Kamehameha Schools, the largest private landowner in Hawaii.

Nearby this grove is a private company, Haloa ‘Aina, that is harvesting and planting new sandalwood. The company wants to demonstrate that it can harvest sandalwood in a sustainable way. While still on a on a small scale compared to other places, it is Hawaii’s largest sandalwood operation. The company harvests the heartwood, the central core of tree that has become blocked with resins, along with its roots to make sandalwood oil. This is the most valuable component of the sandalwood.

Leaving nothing to waste, it sells other parts of the tree for timber, carving logs and for ingredients to make soaps and incense. According to reports, Haloa ‘Aina only uses dead or dying sandalwood trees in their business. Then it uses the proceeds to help fund sandalwood tree restoration work.

There are others who are trying to restore Hawaii’s sandalwood forests. One of them is Mark Hanson, who founded the Hawaiian Reforestation Program in 1995. Hanson is one of the few people, if not the only one, to grow Hawaiian sandalwood from seeds that he germinated. It is not easy to grow sandalwood. It takes a long time for it to grow to a stage where it can produce heartwood from which essential oils can be made. Furthermore as a semi-parasitic plant, sandalwood trees initially need to fasten their roots onto neighboring plants to draw nutrients. This further complicates the growing process as well as any efforts to make them sustainable.

But Hanson has a somewhat unique vision of how Hawaii can make its sandalwood forests sustainable. He draws upon the experience of Australian growers. His idea is to harvest and sell the edible, and reportedly tasty, nuts of the tree. He claims the nuts would yield far more revenue than from the wood itself. The plan definitely has merit, particularly if people begin to value the nuts of the sandalwood tree more than its wood. At which point, there would be incentives to keep the tree in the ground rather than to cut it down. So perhaps in the future, you might see the nuts of Hawaii’s rare sandalwood trees sold in stores throughout the State.

Lava Tubes in Hawaii
The Plight of the Polynesian Poultry