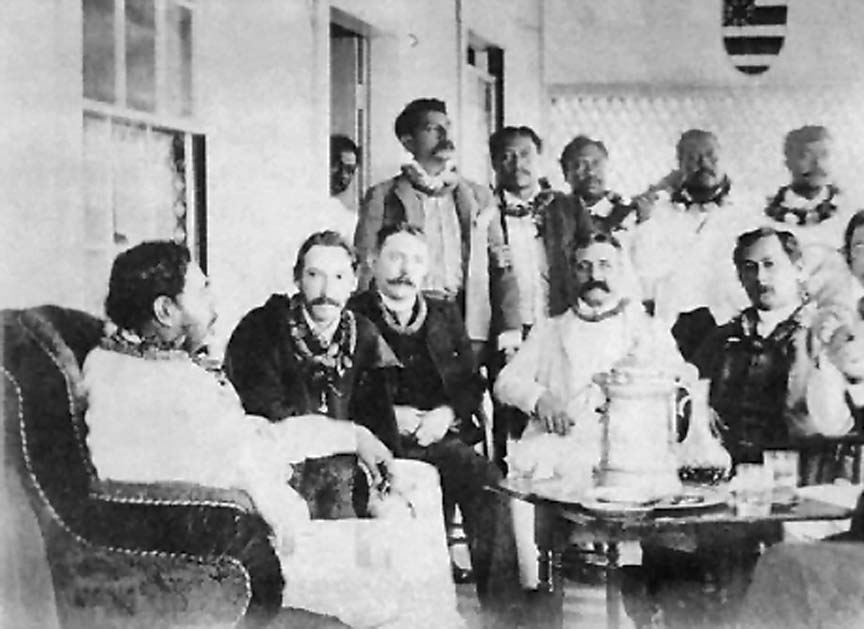 From left to right, King Kalakaua and Robert Louis Stevenson. By not given ([1]; originally at Hawaii State Archives) [Public domain], via Wikimedia Commons.

The Ties Between Robert Louis Stevenson and Hawaii

Many famous authors have written about the lure and beauty of Hawaii, including Mark Twain, Jack London and James Michener. Mark Twain’s most well-known quote about this place was that “Hawaii is the loveliest fleet of islands that lies anchored in any ocean.” Jack London wrote a compilation of short stories in his book, Stories of Hawaii. James Michener is famous for his novel entitled Hawaii and for the movie based upon it. But there is an intimate link between Robert Louis Stevenson and Hawaii. Perhaps no other famous author may have had a more lasting legacy in the Aloha State than Robert Louis Stevenson.

Stevenson was born in Scotland in 1850. At the height of his fame, he decided to travel to the Pacific. He may be best known for his novels Treasure Island, Kidnapped, Strange Case of Dr. Jekyll and Mr. Hyde. In 1888, he and his American wife decided to leave the US west coast on a sea cruise. He badly needed fresh salt air and a clean tropical climate to help with his recurring bouts of tuberculosis. During his travels there, he made several extended stops in Hawaii.

Once in Hawaii, he quickly became a good friend of the then king of Hawaii, Kalakaua. He also developed a close relationship with Hawaii’s beloved Princess Kaiulani. The young princess inherited her father’s Scottish heritage. Stevenson was from Scotland. As a result, they had much in common and they quickly bonded. Princess Kaiulani was just about to leave for boarding school in England and was somewhat anxious about leaving Hawaii. But Stevenson reassured her she had nothing to worry about in a poem that he wrote for her.

King Kalakaua wanted Stevenson to stay in Hawaii. But he continued his Pacific cruise to Samoa where he resided for 4 years until his untimely death in 1894. Today, Hawaii remembers and still honors Robert Louis Stevenson. A middle school in Honolulu bears his name. You can find a grass hut where Stevenson composed poems and literature on the grounds of the Wai’oli Tea Room. The Salvation Army of Hawaii owns the property in the Manoa area of Honolulu.