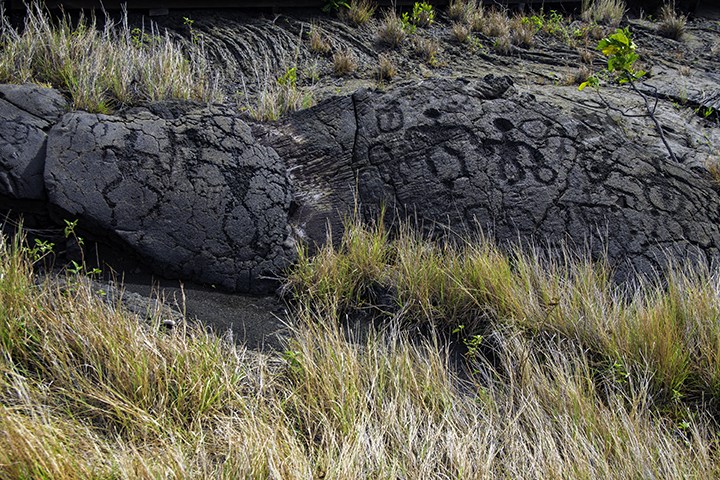 Hawaii has a number of sites with petroglyphs. In such instances, the ancient Hawaiians have scratched into rock faces figures or symbols with sharp pieces of stone. Many of the drawings are of animals, stick-figure caricatures, religious symbols or cryptic geometric designs. Typically, Hawaiian petroglyphs were carved into smooth pahoehoe type of basaltic lava. While they are on all of the major islands, you can find most Hawaiian petroglyphs on the Big Island of Hawaii.

No one may truly know the intent or purpose of petroglyphs. This is because the people who created them are long gone. Despite that, petroglyphs can provide some intriguing insights and clues into what life in ancient Hawaii must have been like. Below are places where you can view some of the state’s best examples of these fascinating carvings into Hawaiian lava rock.

This area is along the Chain of Craters Road in Hawaii Volcanoes National Park on the Big Island. In this area, you can find over 23,000 examples of petroglyphs. This makes it the largest petroglyphs site, not only in Hawaii, but in all of Polynesia. Here, you can take a self-guided tour along a 0.7 mile trail that takes you to many of these petroglyphs.

This site, near the Mauna Lani Hotel on the Big Island, features over 3,000 petroglyphs. They include images of paddlers, sails, marchers, dancers, family groups, dogs, chickens, turtles and deities.


The petroglyphs, along Nu’uanu Stream on Oahu, are accessible through the Nu’uanu Memorial Park and Mortuary in Honolulu. Here, you can view petroglyphs depicting dog and human figures. According to some, the dog images tell about the legend of a number of supernatural dogs, one that guarded a nearby waterfall and another that ate humans.

These petroglyphs are on a short trail off Olowalu Village Road near the Olowalu General Store on Maui. Also known as Pu’u Kilea, ancient Hawaiians etched around 100 images of human, animal and sails into the rock face.