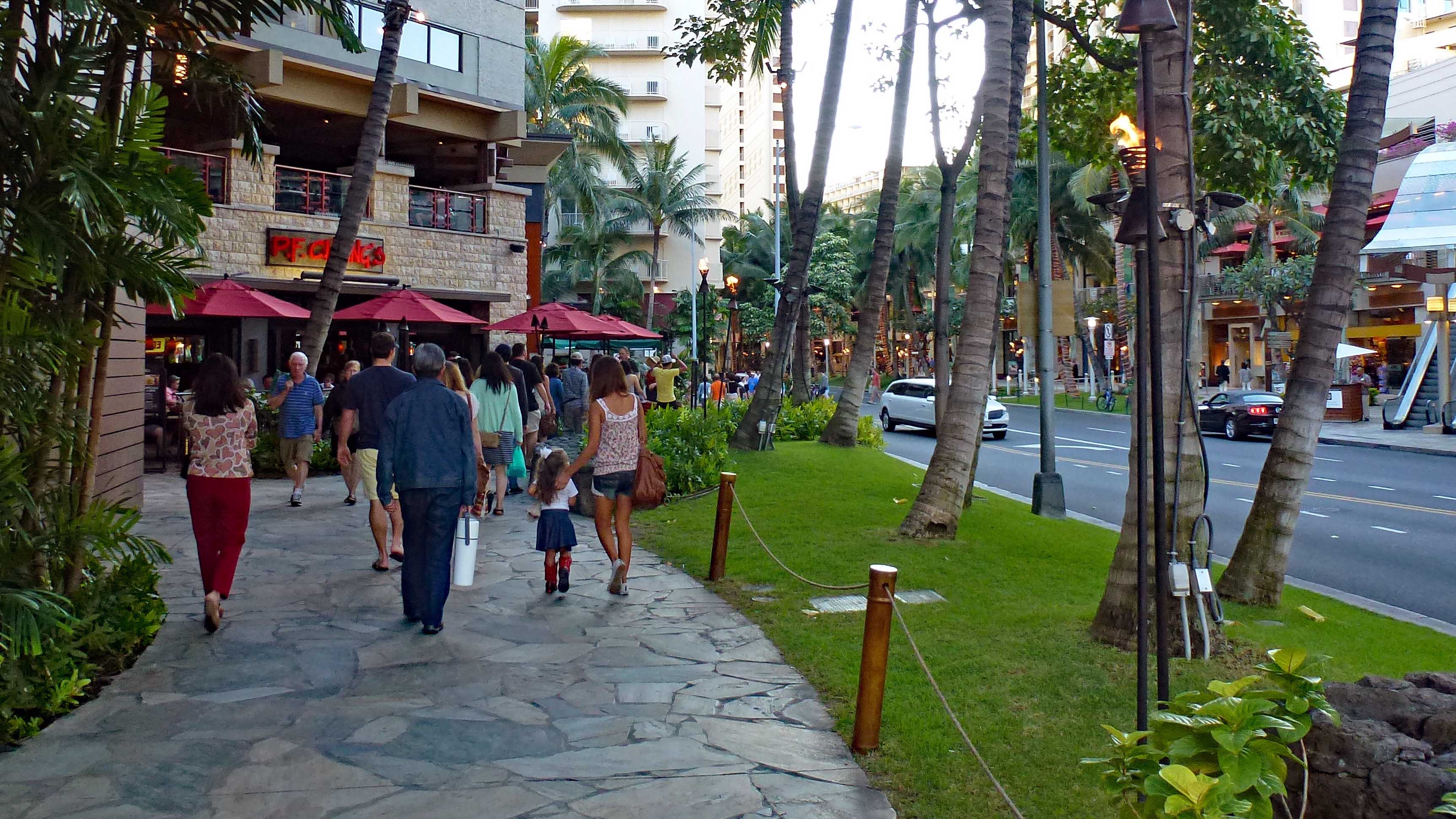 Walking in Waikiki. where you can hear many commonly used words in Hawaii.

Perhaps more so than traveling to any other place in the US, you may come across words and phrases that you are probably not used to hearing. Many local residents commonly incorporate words into their speech from the Hawaiian language as well as from languages from other ethnic groups. This includes the Japanese, Filipinos, Chinese, Koreans and Portuguese, whose ancestors immigrated to Hawaii many generations ago. Below are some of the commonly used words in Hawaii.

Also, many local residents speak what is known today as Hawaii Creole, more commonly known as Pidgin English or simply Pidgin. Pidgin English started among plantation workers who first arrived in Hawaii during the 1800s. Virtually all of them did not speak English. Because they needed to communicate with their bosses as well as with their fellow workers, a form of English developed among the plantation workers. By the early 20th century, Pidgin English was the predominate language for most of Hawaii’s population.

Today, Pidgin English is still spoken today although not to the degree to which it was several generations ago. But it still exerts a strong influence in two ways. The first is how many local residents communicate among each other. And the second in the idiomatic phrases that are often used today in Hawaii. As a result, in 2015, the US Census Bureau listed Pidgin English as an official language of Hawaii.

To better help you understand what local residents are saying, here are some of the commonly used words that you might encounter during your next trip to Hawaii.

Differences in Type of Words Used

Additionally, there are words that many in Hawaii won’t normally use  compared to people on the mainland US. The below is a sampler of some of them. Understanding the meaning of commonly used words in Hawaii might offer insights into State’s unique culture.

People on the mainland call sandals made out of rubber flip-flops. But in Hawaii, people call them slippers.  Plus in the minds of many people from Hawaii, calling slippers “flip-flops” is uncool. So if you want to be cool in Hawaii, perhaps you’d better call the rubber footwear on your feet slippers.

Most people from Hawaii refer to discarded refuse as “rubbish,” not garbage as would be the case on the mainland US. This is also why people in Hawaii call a garbage can and a garbage man as a rubbish can and rubbish man. Most won’t be able to explain why the term rubbish is more commonly used in Hawaii than garbage. But that’s just how it is in the Aloha State.

Yes, sauce made from fermented soybeans is definitely called soy sauce. But in Hawaii, most residents call it “shoyu” which is the Japanese word for it. This is probably not surprising because a large segment of people from Hawaii are of Japanese ancestry. And for whatever reason, people just prefer using the Japanese word for soy sauce.

Whenever ordering that most iconic of Hawaiian food dishes, kalua pig, mainlanders usually order it as kalua pork. One can suppose that on the mainland, people might prefer to call that porcine mammal as pork rather than pig. Perhaps the thinking is that it invokes a more appetizing sounding image.

Sushi is a type of Japanese cooked vinegar-marinated rice dish on which a number of other ingredients could be added to it. Such other ingredients could include raw or cooked seafood, seaweed, egg or vegetables. So please note that sushi is definitely not simply raw fish. Countless people from the mainland have erroneously called raw fish sushi, although less so than in the past. The correct term for raw fish is sashimi, which is the Japanese word for it.